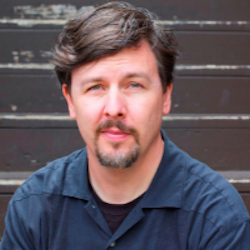 Recognized in The New Yorker, TIME, The Seattle Times, IMAGE, Christianity Today for his writing on cinema, Jeffrey Overstreet is a novelist, memoirist, and arts critic.

He is a Writer-in-Residence and an assistant professor of English and writing at Seattle Pacific University (where he also earned his MFA in creative writing). He teaches courses on writing fiction, poetry, and memoir; academic writing and research; and film studies.

An award-winning film critic, Jeffrey has traveled around America and internationally as a public speaker on the subject of film and faith. His “memoir of dangerous moviegoing” — Through a Screen Darkly — is available from Baker Books.